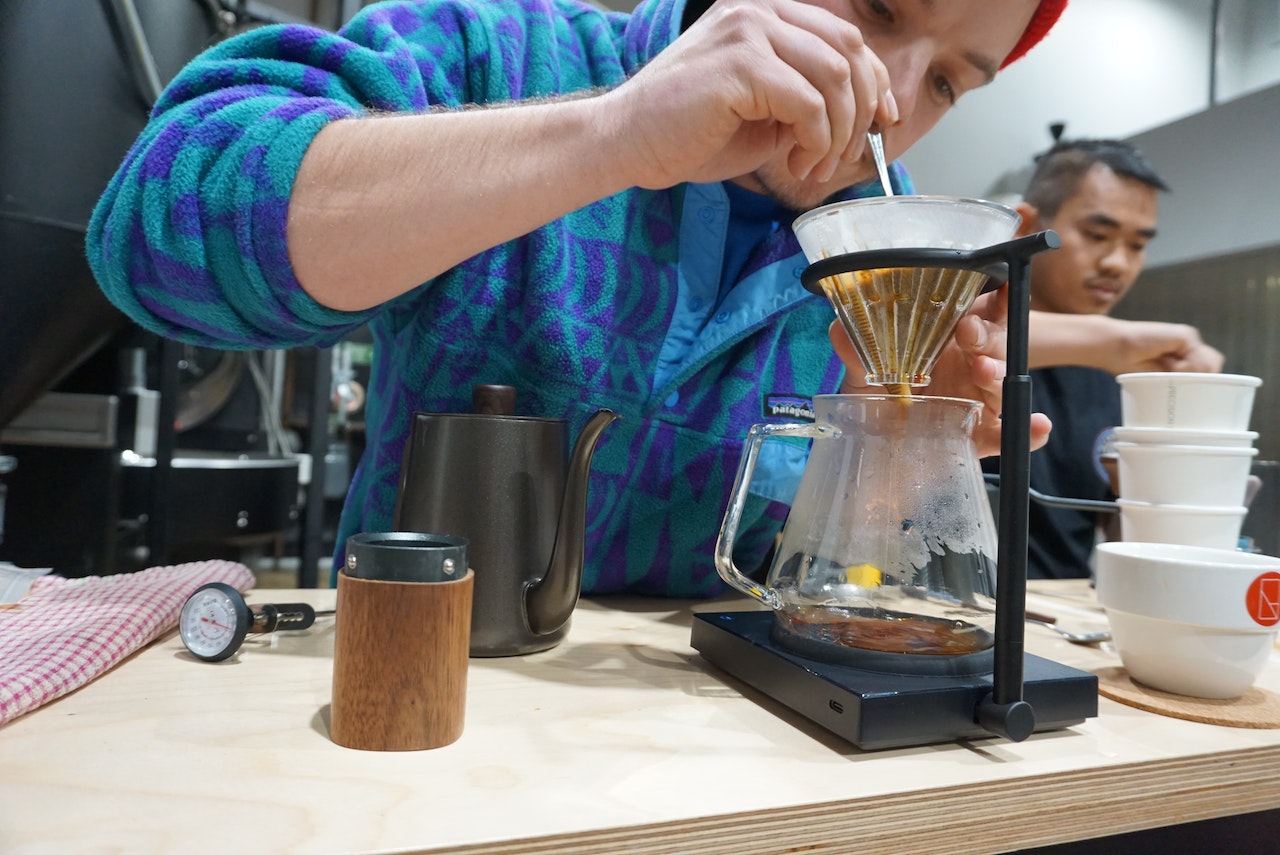 Before booking my Brewers Cup ticket, I think I had brewed a total of 10 v60s in my life. Between the 30th of June and the 12th of August, I brewed well over 100. I've wanted to approach Brewers Cup in a formulaic way. At the beginning, I just needed to get comfortable with brewing a v60. After two weeks of brewing and brewing and tweaking and brewing, CRS announced they were hosting a competition to launch a new v60 inspired product. Perfect.

My competition pedigree may be a bit lacking, but I love being on stage. I'm not an especially competitive person, but I have a huge drive to do my best and have as much fun as possible. I've done plenty of local latte art smackdowns in Sydney and in the USA, and I placed third at the NSW Aeropress Championships last year. This would be my first more formal competition since then.

The competition would follow the following format: brewers would be provided a coffee to brew with in a 4 way heat. You would have prep time to sort coffee, but you had to grind and brew on stage, using the provided water. You'd have five minutes to make your brew using the hand grinder, scales, dripper, kettle and papers provided by Timemore. Your brew would be evaluated at the end of those 5 minutes, which meant the coffee would most likely be pretty hot. The competition was designed to be pretty fair, you could sift if you wanted, but everything else meant we were all in the same boat.

To prepare, I focused a lot on technique. I assumed I would only have to come up with a good recipe, get on stage and do that. At this point in time, I thought technique was everything. The only dripper we had kicking around the roastery was a one-cup Hario glass v60, which was similar to the dripper we were provided. I wanted to test as many variables and suggestions from other coffee professionals about brewing v60 as possible. I tried spinning, tapping, grinding coarse and fine, I tried spacing out my brews to increase contact time, I tried water temperatures. I ended up sticking to what I knew, use hot water, spin and tap, pour quickly in one point to increase spin and turbulence. I was getting consistent and flat beds with high extractions in no time.

Before I knew it, the competitor briefing was booked in at the CRS pop up in St Peters. I rocked up, watched the demonstration, took home my sample of coffee and jetted off. I didn't stick around to play with the grinder, get a feel and rough bearings, I didn't grind out any samples to practice with, and I didn't use the dripper. To me, my recipes were coming out good! What more could there be?

I got on stage, feeling confident, rough and ready. I had some friends there to support me, I'd gotten rid of quakers and roughly sorted the samples. I rinsed my papers, found a roughly equivalent particle size to my EK sample, and got grinding. I started pouring, stirred my bloom, and introduced my big second pour. The drip seized up. It was dripping very slowly, so I tried spinning the dripper. It was hot. The water didn't drip out any faster. I stood waiting until there was 30 seconds left. I bypassed the heavy concentrate by an approximate 50g of hot water to bring it close to the yield I wanted and served it. I was convinced that was it, that my brew wasn't going to taste good, but I got through to the next round.

It was after this learned three things about competitions. Three things that would come back to haunt me at the Aeropress champs. Firstly, get comfortable with your brewing devices. Know them inside out. Secondly, if you need to travel, make sure your recipe will travel too. That includes grinders, brewing gear, water and scales. Finally, have a backup plan if something goes wrong. If you don't do these first two things, something will.

What got me, was I didn't learn anything! In the second round I got up and made exactly the same mistakes. I brought my grinder to the same location (I'm not sure why) and tried the same things. Obviously it didn't work for me, and I got knocked out after that. What I should have done was grind much coarser and do more pours, or stick to doing a bypass method. Where I let myself down was not exploring the what if options. I thought the possibility of having a slow drip was lessened because I had my techniques downpat. But manual brewing is about knowing how to work with what's in front of you.

There are plenty of techniques that I got to understand much more as time went on, but that's for next time! Happy brewing